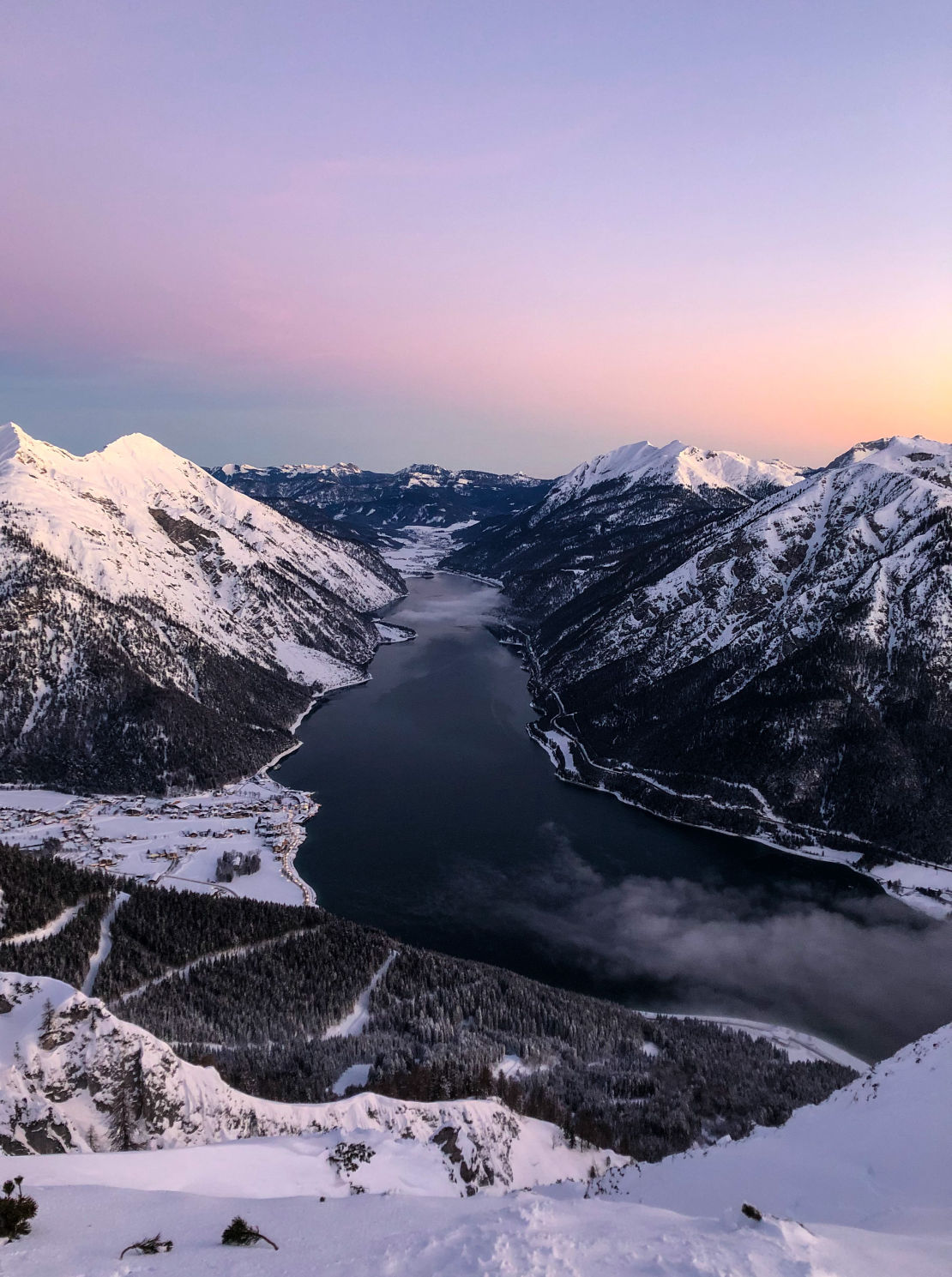 DIARY OF A PEAK

Sian and I had been following a local photographer and he often posted photos of an awesome winter view overlooking a massive lake. After some research we located the peak. Although it would seem like something simple to hike this peak has delivered some of the toughest and most challenging as well as best splitboard experiences in the Zillertal.

Sian was loving the idea of splitboarding, so we purchased a setup and had a successful mission on Yotie. However, this would be her 2nd mission. We were hoping to use the lift to get half way up the mountain, but it had closed a few days before. This meant it was time to hike the disused pistes.

Ordinarily that wouldn’t be too bad, but the final pitch up the mid station was icy as hell. She managed to do it, but it was pretty scary without crampons. We made it to the summer hut, which was a good 500m of ascent. A decent stint. Then the real work began. We headed off piste towards our proposed route.

Progress was good until we hit a load of avalanche debris. This had destroyed the main path up and after trying valiantly to traverse next to the debris field to find a safe path up we decided it wouldn’t be advisable to keep going. The main face is in the 35 degree range, so prone to additional slides and also super tough to skin up as a beginner. Sadly it was time to exit and plan for another mission in the future. 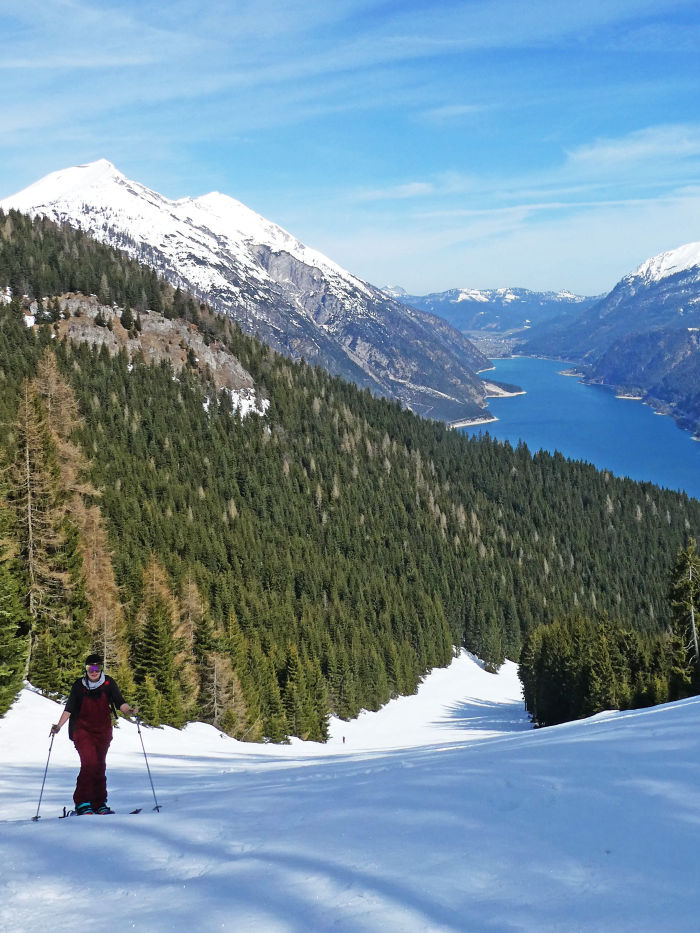 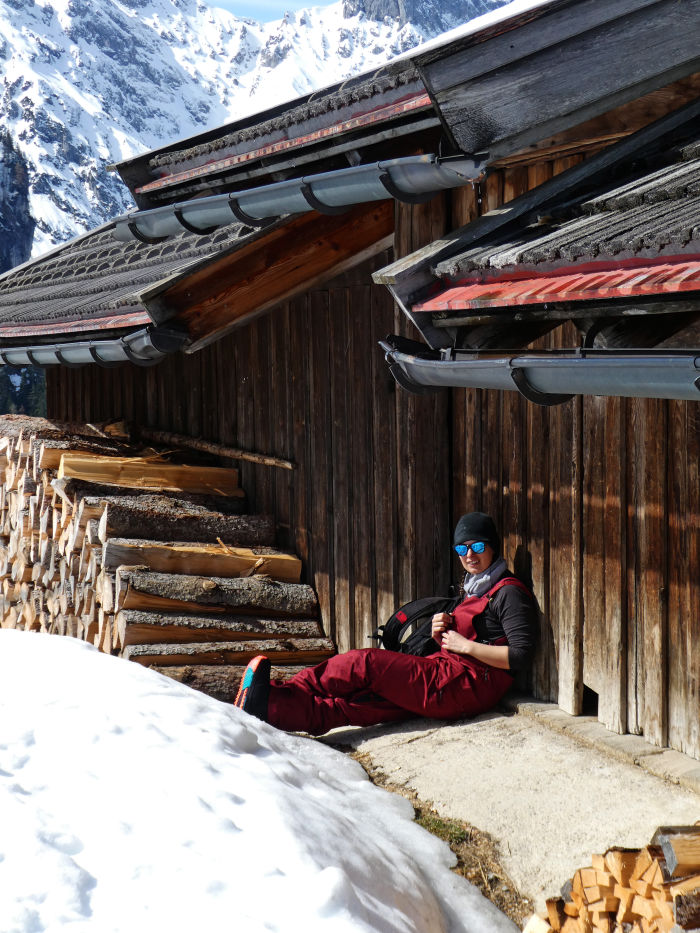 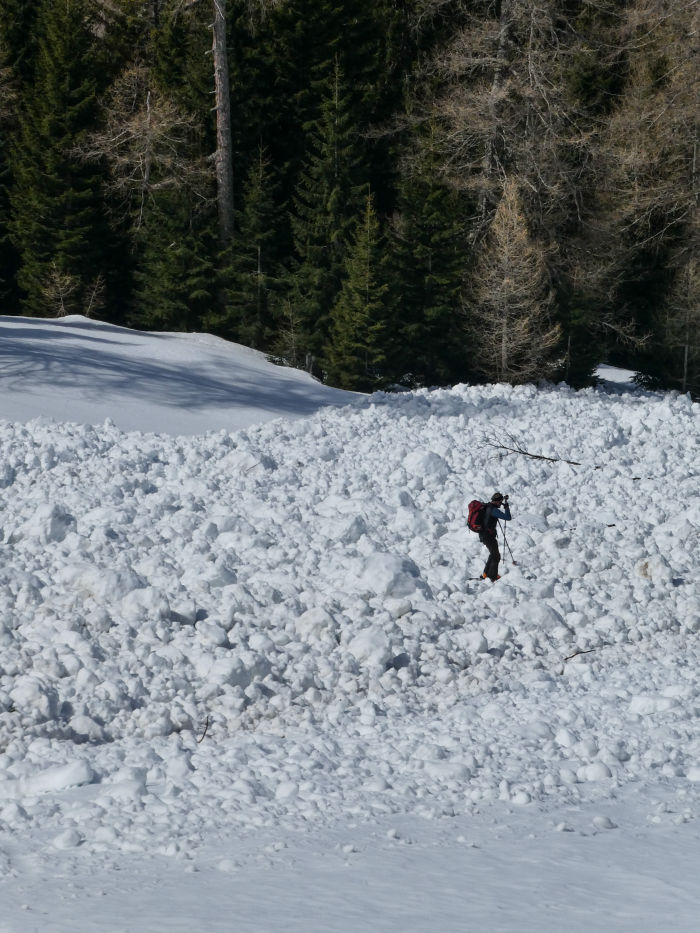 With the main face being so steep and primarily north facing I was looking for a solid level 2 avalanche forecast or below with minimal instability in the snow pack for a client group to attack the peak. That time had arrived. We gathered the crew and headed up. A quick lift to the mid station saved us a heap of effort. We sorted our change-over and followed a skin trail through the trees on a constant step incline. Luckily we had some fresh snow that made it more achievable.

Once we came out of the woods we were on an imposing face that seems to go on forever. The crew were finding it pretty hard going as we battled through to an awesome view point near the summit.

Near the top there's a mass of covered bushes that created air pockets that were too tough for splitboardig, That meant a 100m, 45 degree boot pack. An exhausting last step, but it ended on a nice flat plateau to the summit with some even more epic views and a welcome rest for the crew before an all time shred back to home base. 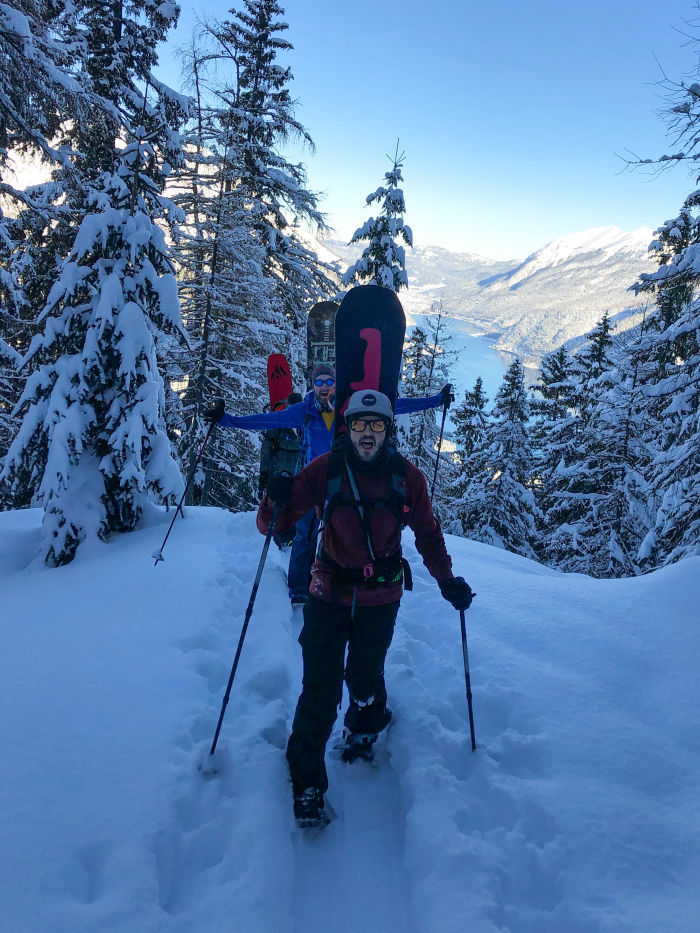 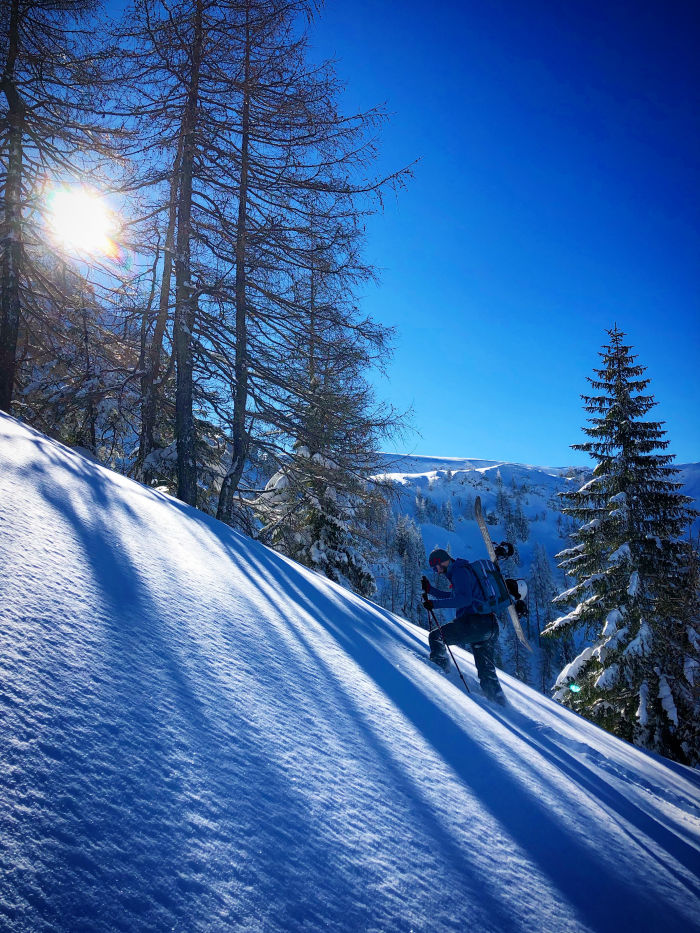 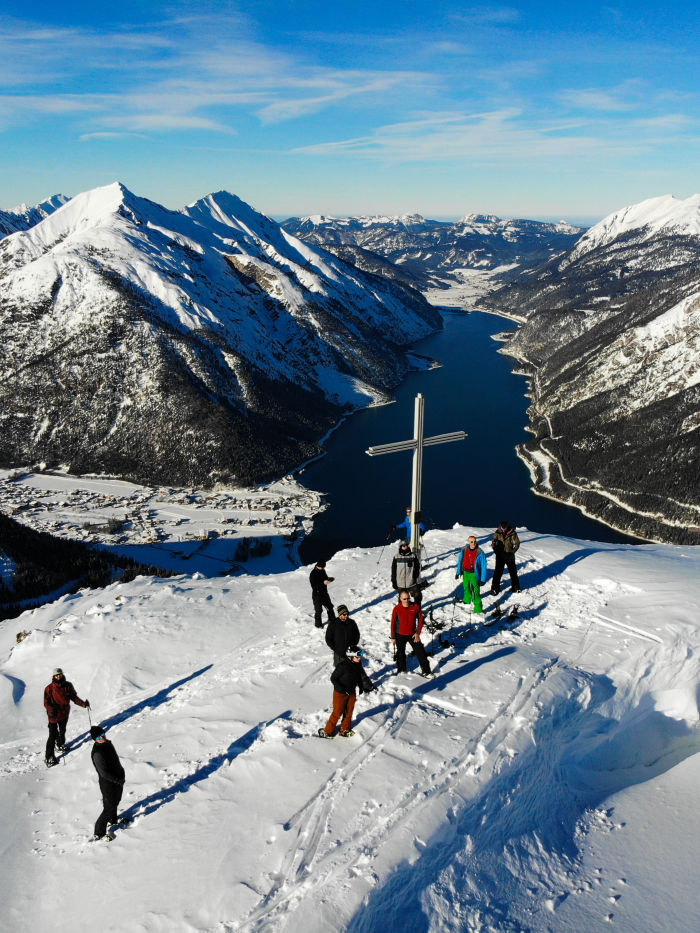 Sian and I pencilled in a nice break at the end of May in Mayrhofen. During that week we eyed up another attempt at the peak. This time we had the benefit of the cable car to bring us up to the mountain hut. From a previous walk in Mayrhofen that week I knew we’d encounter some snow near the peak (2000m), but hopefully nothing too intense. It was the end of May!!!

We decided to try for the similar walking path we attempted before. Things began well as we approached 1600m altitude. We crossed some old avalanche debris and still managed to maintain and nice safe ascent, but this didn’t last long. Although we had decent hiking gear the snow was starting to build up over the path pretty quickly.

This led to some pretty intense no fall zones as the snow was pushing us towards some cliff edges. When you need crampons and ice axes, you know you have to call it. We made our way back to the hut and investigated the winter route I’d previously completed, but that also required crampons and axes. Really gutted and surprised at the level of snow still on the peaks in May, but it had been a winter of all time snow, so we called it a day and headed back to safety and a welcome lunch by the lake. 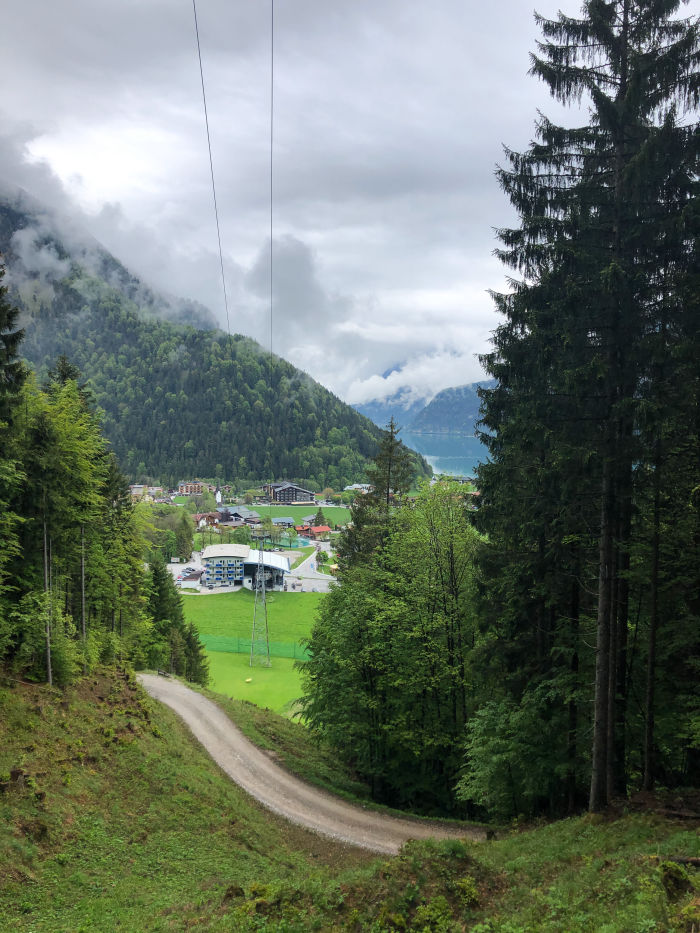 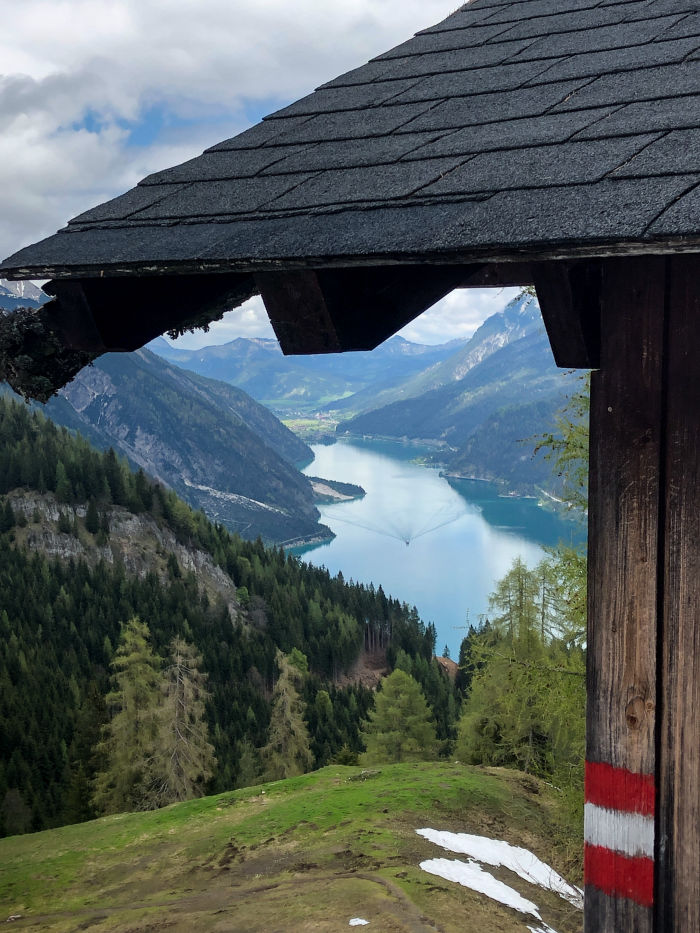 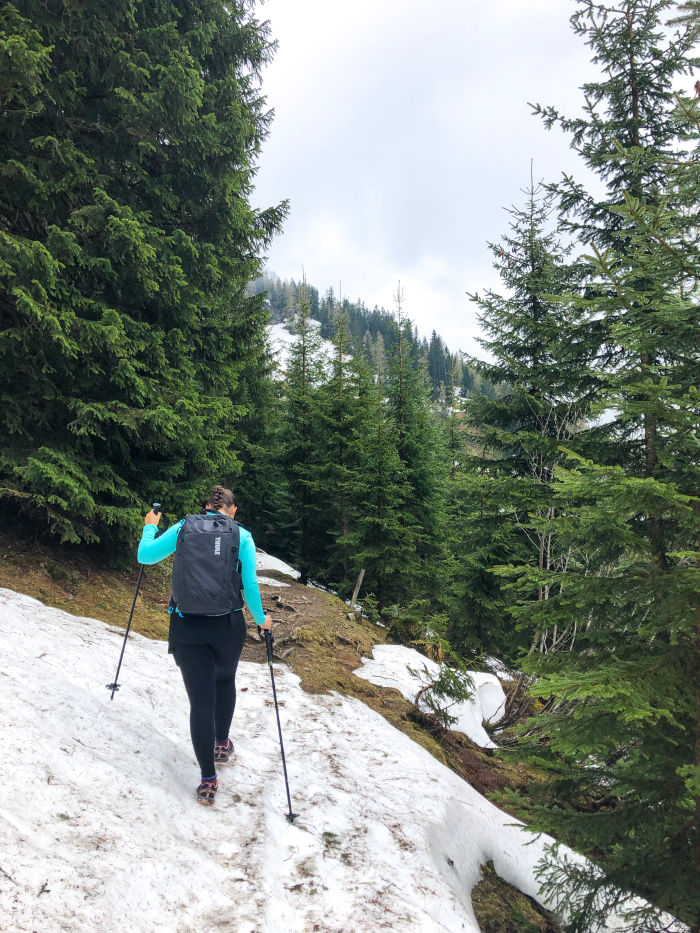 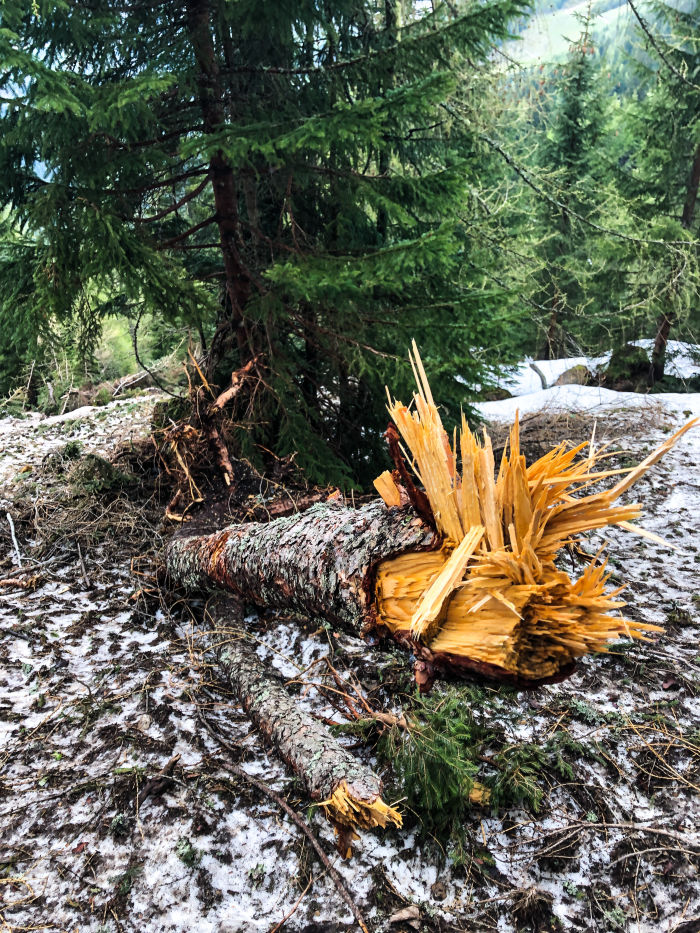 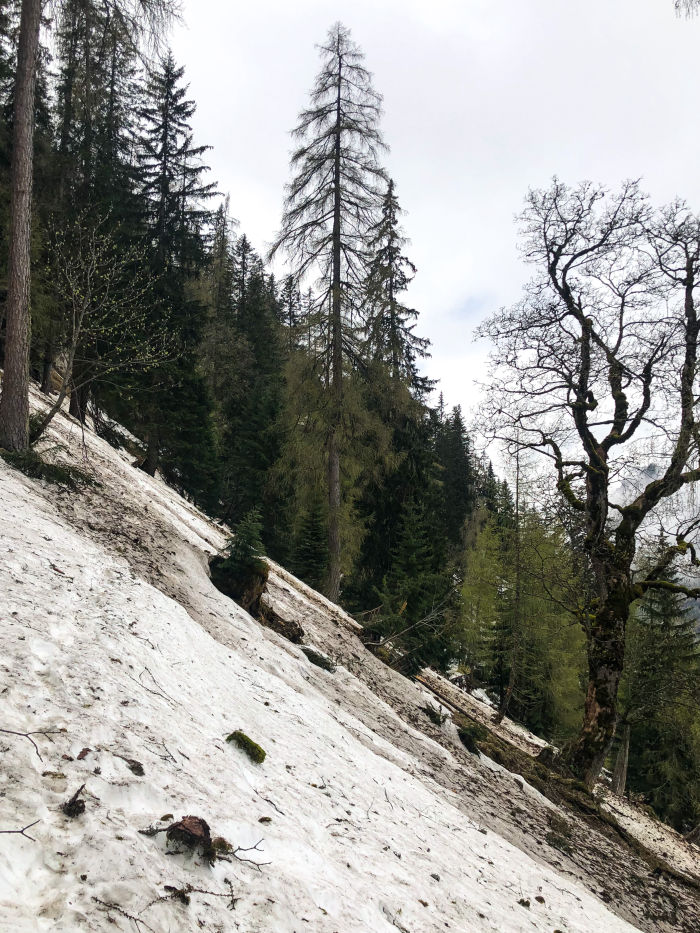 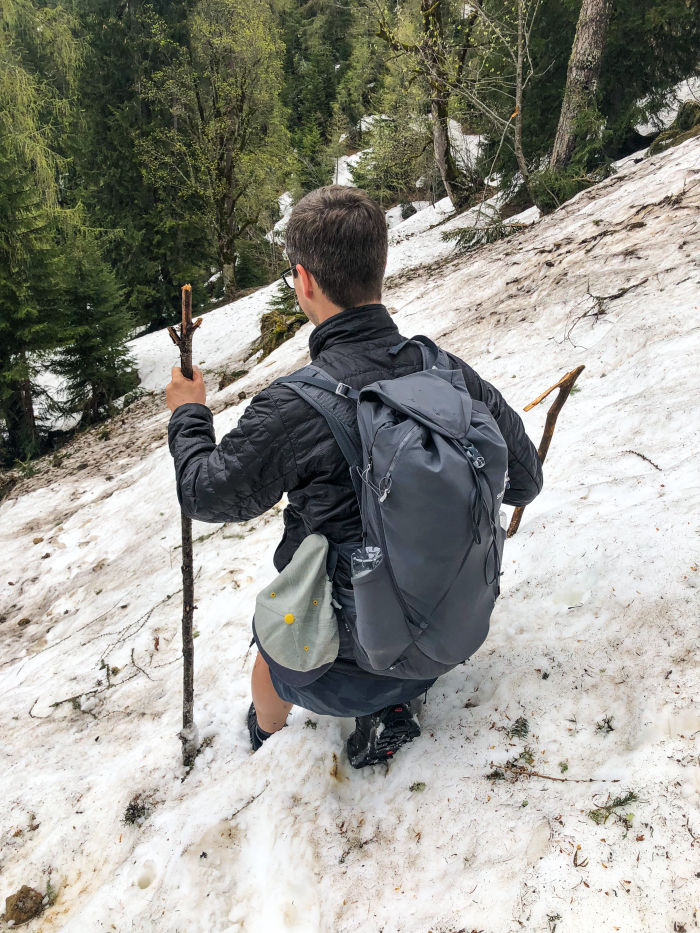 To tick some boxes for an Austrian qualification I wanted to complete a 1000m+ tour mission and this fit the bill. Rather than take the lift I grabbed Tom and Craig on their coaching day off and we started the adventure from the lake.
Initially it started really well with a gentle flow up some snow covered mountain roads and crossing some pistes making sure to avoid random sledding punters. We powered up the now infamous red run to the mid station hut for a welcome break.
We headed up the previous years trail in the trees and the battle began. Whereas last year we had fresh pow in the trees, this time under level 1 avalanche conditions we were served up an icy steep path with little grip. The crampons came out early as we forced our way near to the peak. Tom didn’t have crampons and pushed valiantly, but it was time for us all to swap over to Verts as we dug deep for the final push. We made it to the top to some epic views and decided on our evac plan.
Heading back down the ice was not ideal that fun, so we mapped out a fresh couloir with some sheltered powder. Craig dropped in first, but clipped a rock as the snow slid away on entry. That left a tasty scare. After that, we had some nice snow before we were met with a tangled forest that led us to the upper part of the resort, which sadly ended in an unpisted ice sheet. Wow. What a ride. A total battle, but an amazing and hectic adventure I’ll never forget. The Bears Head gives you everything. The worst and best of all conditions. 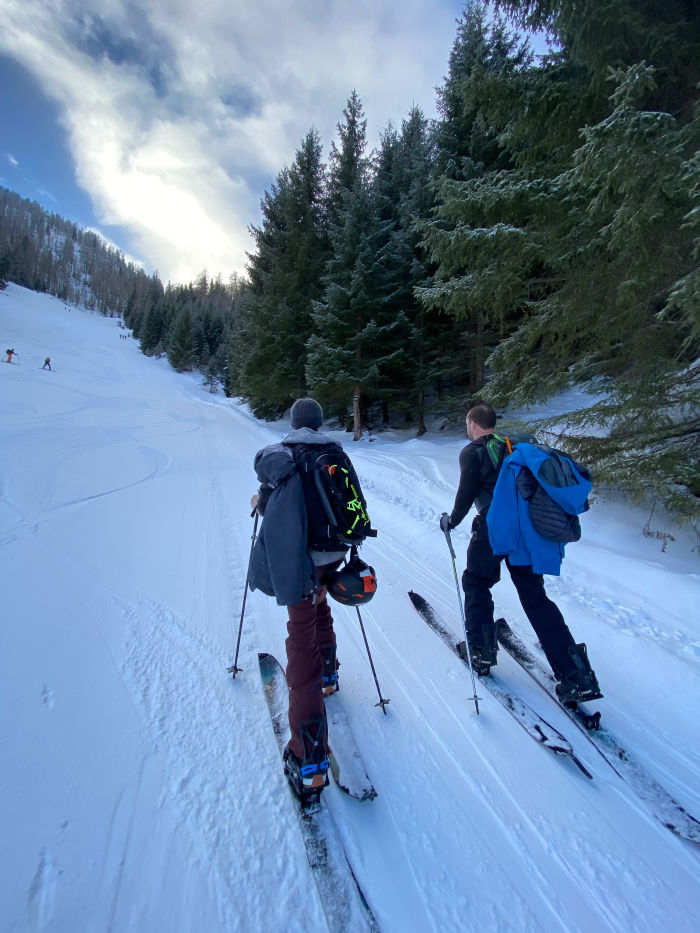 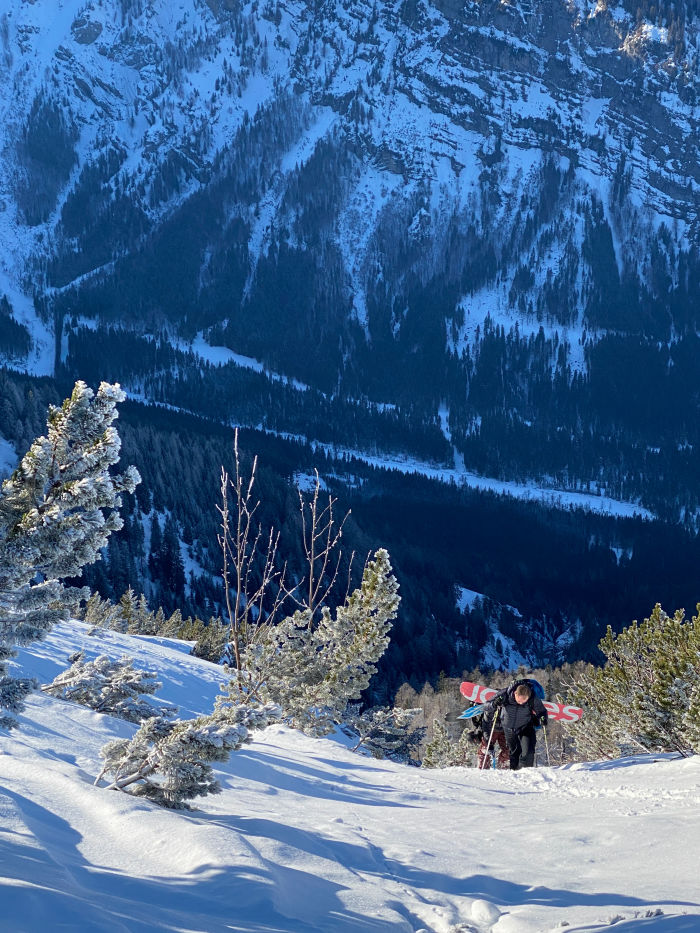 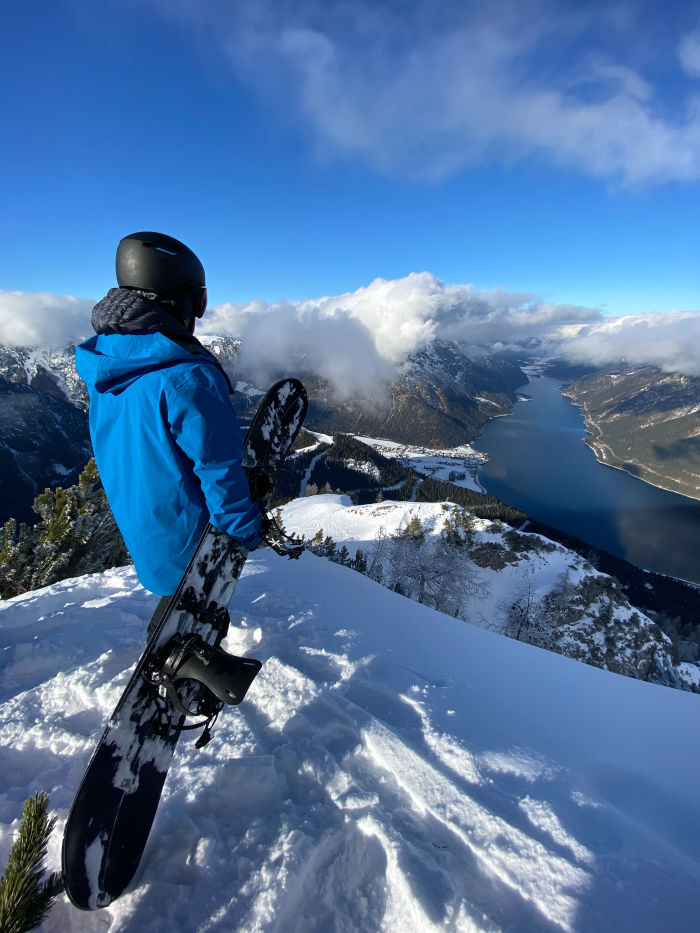 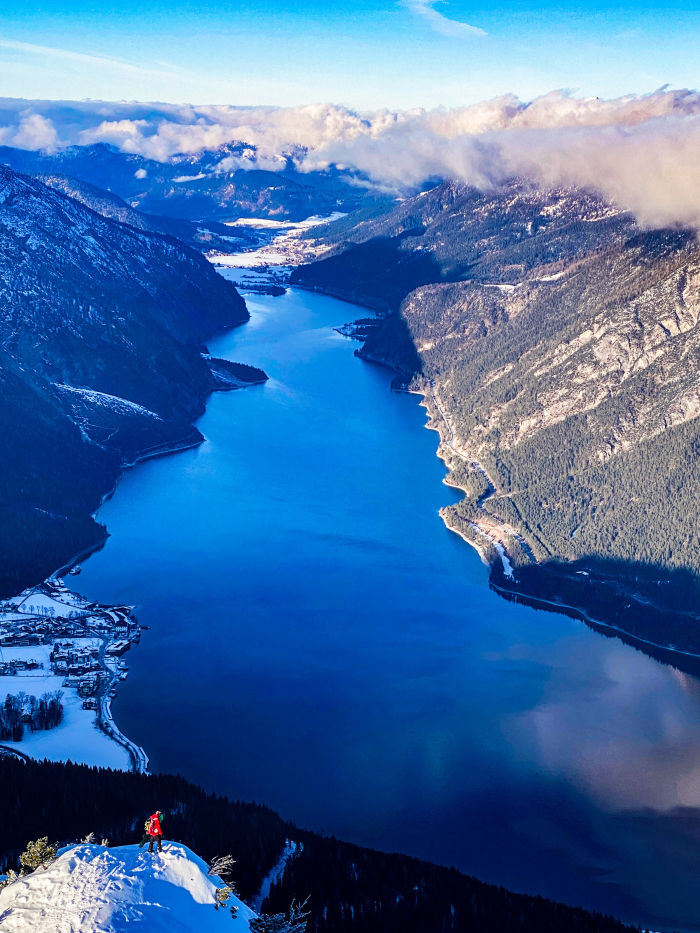 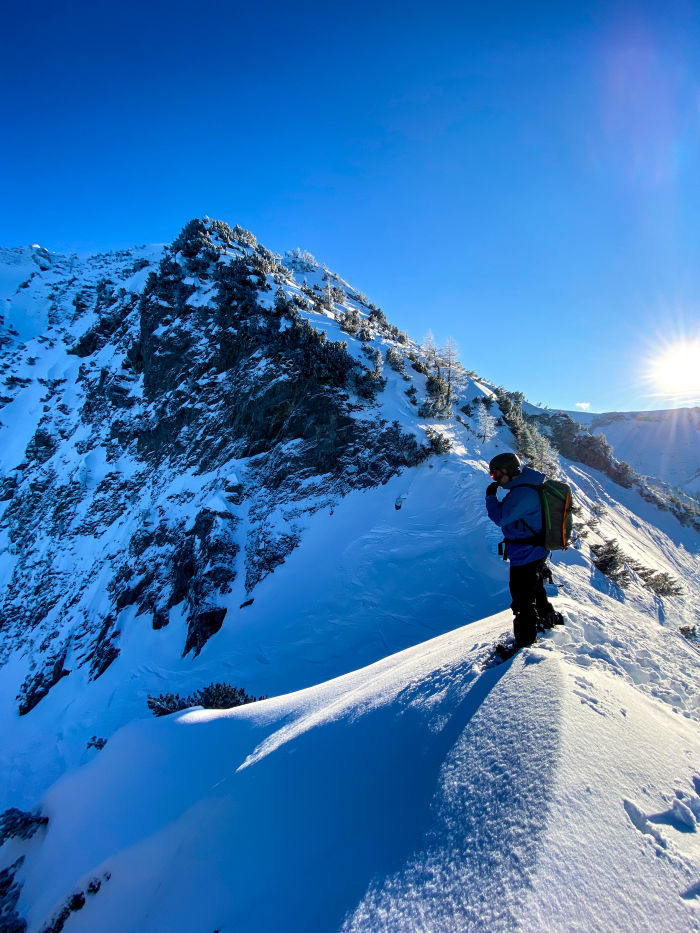 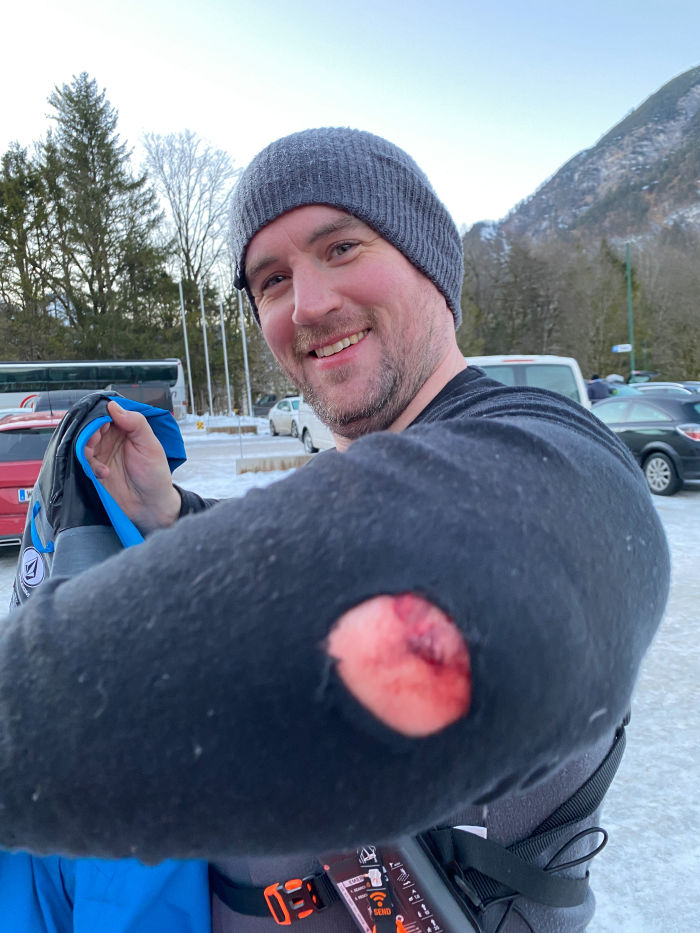